Sorry, you need to have Cookies enabled to use this site. Please enable Cookies and refresh this page.

Instructions on how to enable Cookies can be found below for the browser of your choice:
Internet Explorer
Mozilla Firefox
Google Chrome
SUBSCRIBE TODAY! 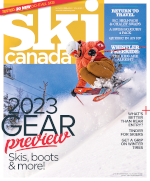 Ski Canada publishes 4 issues a year, mostly in the few months leading up to ski season:

When will my subscription start?

If you're subscribing for the first time, you should receive your first issue within 3–6 weeks.

Most readers are particularly interested in receiving our current Buyer's Guide and December issues, so we usually send out those issues to anyone subscribing in the next few months after they were published, until we run out of copies.

If you subscribe during the summer months, of course, our next issue might take a little longer than six weeks, so we usually send out our Winter issue to new subscribers so they don't have to wait until the next Buyer's Guide comes out.

Whatever the season, renewal orders always start with the first issue after expiry—assuming you don't wait until the party's over before renewing (in which case we'll send you the issues you missed, if they're still available).